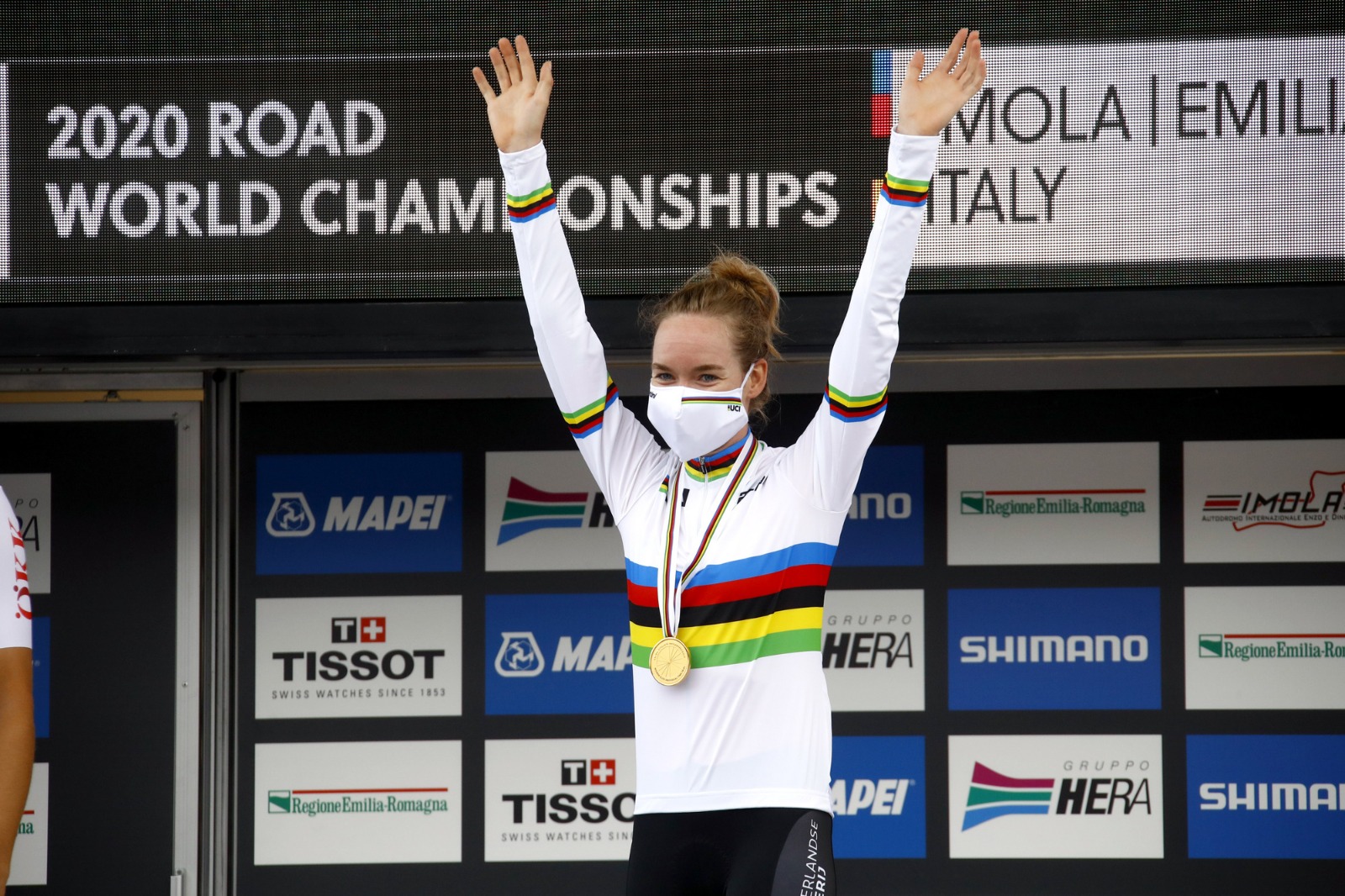 After the pink jersey, Anna van der Breggen wears the rainbow one. The Dutch flag waves on the first day of the 2020 UCI World Championship in Imola – Emilia Romagna. The 30-year-old fresh winner of the Women’s Giro d’Italia conquered the opening time trial of the world championships, covering the 31.7 km flat course scheduled for the Elite Women ITT with a time of 40’20″14. Rolling at 47.154 km/h she beat the Swiss Marlen Reusser and her compatriot Ellen van Dijk.

The defending world champion, the American Chloé Dygert, was unlucky after she went off the road following a skid in the downhill curve, and was forced to abandon the race while she was leading at the intermediate. Tenth place for the Italian Vittoria Bussi, who gives the home national team the top ten, 25th for the young Vittoria Guazzini on her debut in an Elite world championship.

It’s a very special year. I’m already really happy the World Championship is here and it could go on, especially for me, after four times trying and getting second. It’s really 'crazy' to finally be world champion. I’m really happy with it. It wasn’t really difficult to find motivation for it, because it was something I hadn’t yet won. And also, in the beginning of this year, we had a lot of time. So, for me it was a big goal to train on it. I think I really discover, this year, that TT can be fun, and you can do very different trainings in it. And if you have time, like I had at the beginning of this year… and I was also quite lucky because I could go outside. It wasn’t a very strict lockdown in the Netherlands.

sayes Anna Van der Breggen, with the gold medal around her neck. 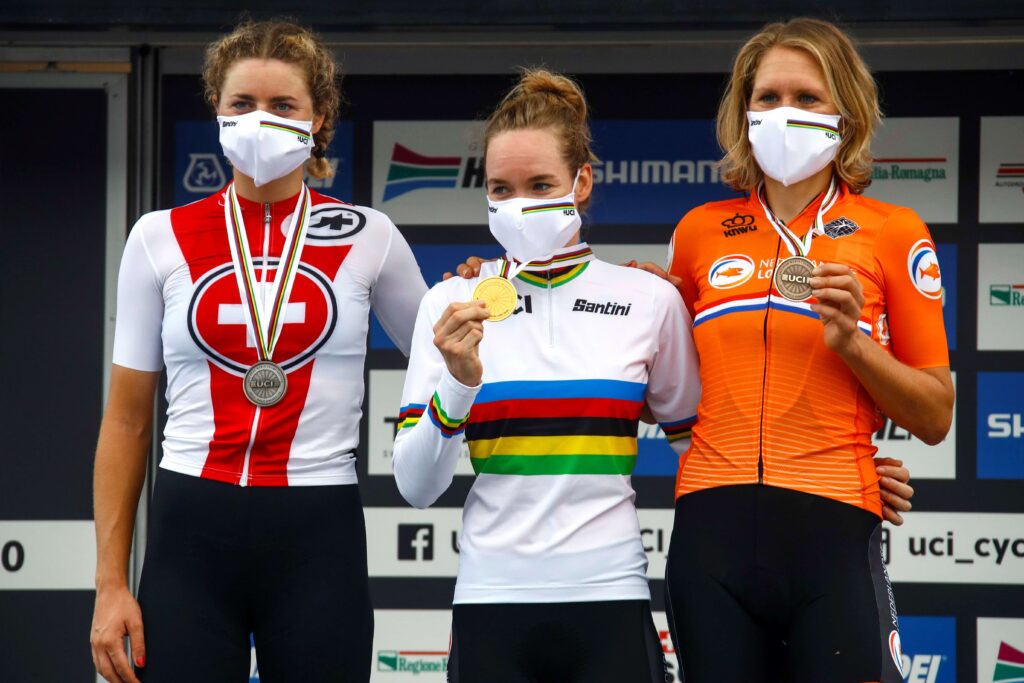 There’s a lot left that I can do. It’s not that I need to finish a bucket list, it doesn’t feel like that. And I really enjoy cycling at the moment. And it’s also, I think, that now I’m more relaxed. If I win, it’s really great; if I don’t, I’ll try next time. I enjoy that way and cycling in general. So I have no bucket list» continues the new world champion, who sent a message to Dygart: «I think everybody who was riding today tried to get prepared as best as possible for it. We did a lot for it and I think also Chloe – she was the world champion last year – she hadn’t done any races yet… I think she probably did a lot for this. And I feel really sorry for her because this is the worst thing that can happen.

About the road race on Saturday:

I think it’s a beautiful circuit. I didn’t ride it yet, but I’ve heard it’s really hard. And as to Annemiek Van Vleuten, I haven’t spoken to her yet, so I don’t know how she feels with her wrist. I think she has to make a decision herself, because nobody can feel how it feels. If you can really climb without any pain and if you can ride well, I think it’s possible. And even without Annemiek we have a strong team as the Netherlands. So, we’re really motivated. I’m not ready yet for Saturday, but Tomorrow I’ll be again. I’m looking forward to Saturday.

I’m really happy. I thought 'I can do something good' and I’m so happy to have the silver medal today. I won’t say it’s a lost chance, because Anna is really strong and powerful. She knows how to climb, how to descent, how to corner. One could say she’s much more professional and complete than I am. I have a lot of things to develop. I think it’s right, she was faster in the last 6 km that were quite technical, and I also expected not to be the fastest. As it was today, it’s something I need to develop.

I’m happy with the bronze medal although I’m a bit disappointed. I was happy to start, because at first I wasn’t selected, but I feel some unsatisfaction. I knew I really started too slow, I really lost time in the first half of the race. That’s something I can only regret. I had a good second part but then… I’m not completely satisfied, but in the end I need to be happy with this medal.

Above Anna van der Breggen in the rainbow jersey. Below, in order, Dygert, Van der Breggen and Bussi in action. The winner after the finish line and the complete podium. 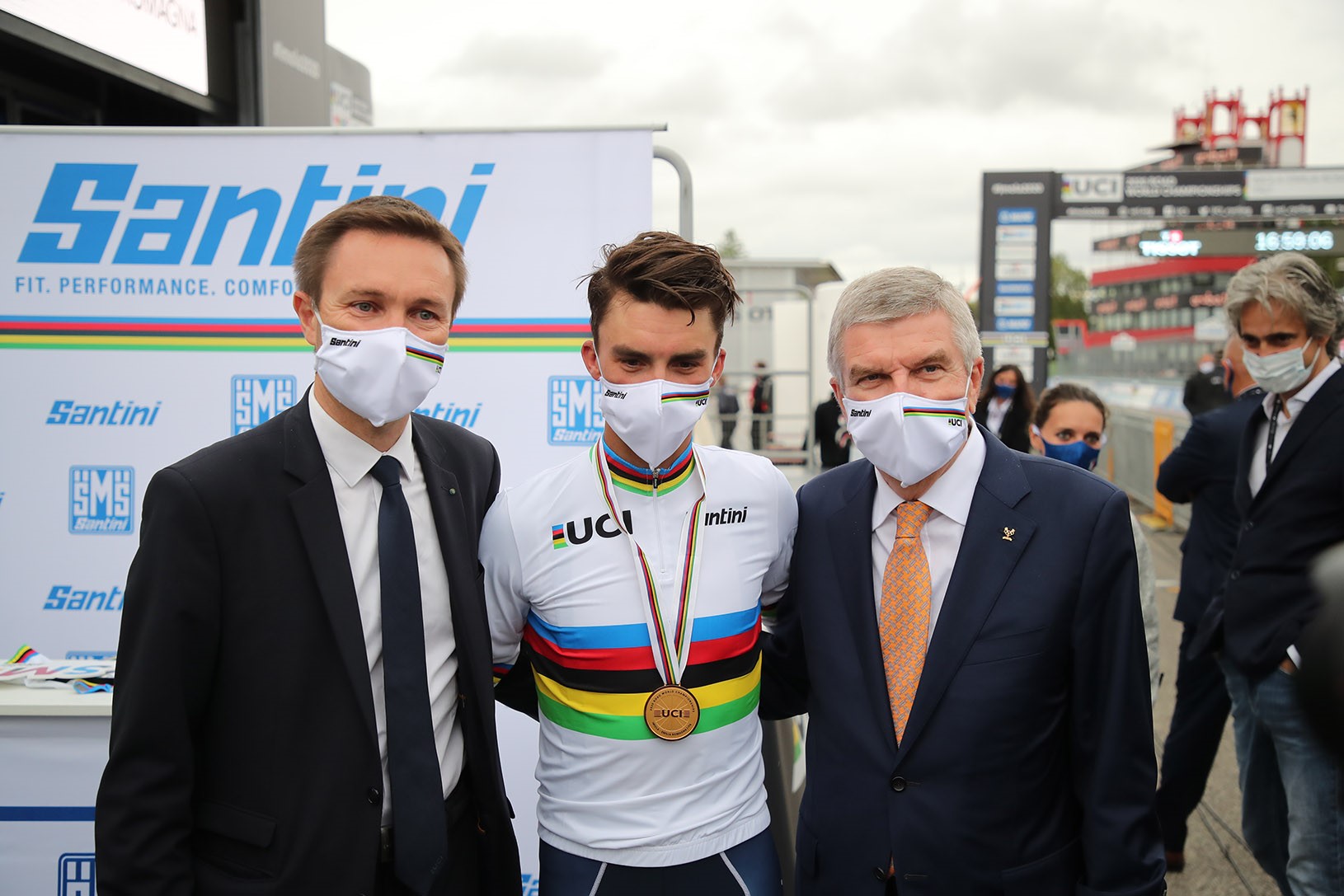 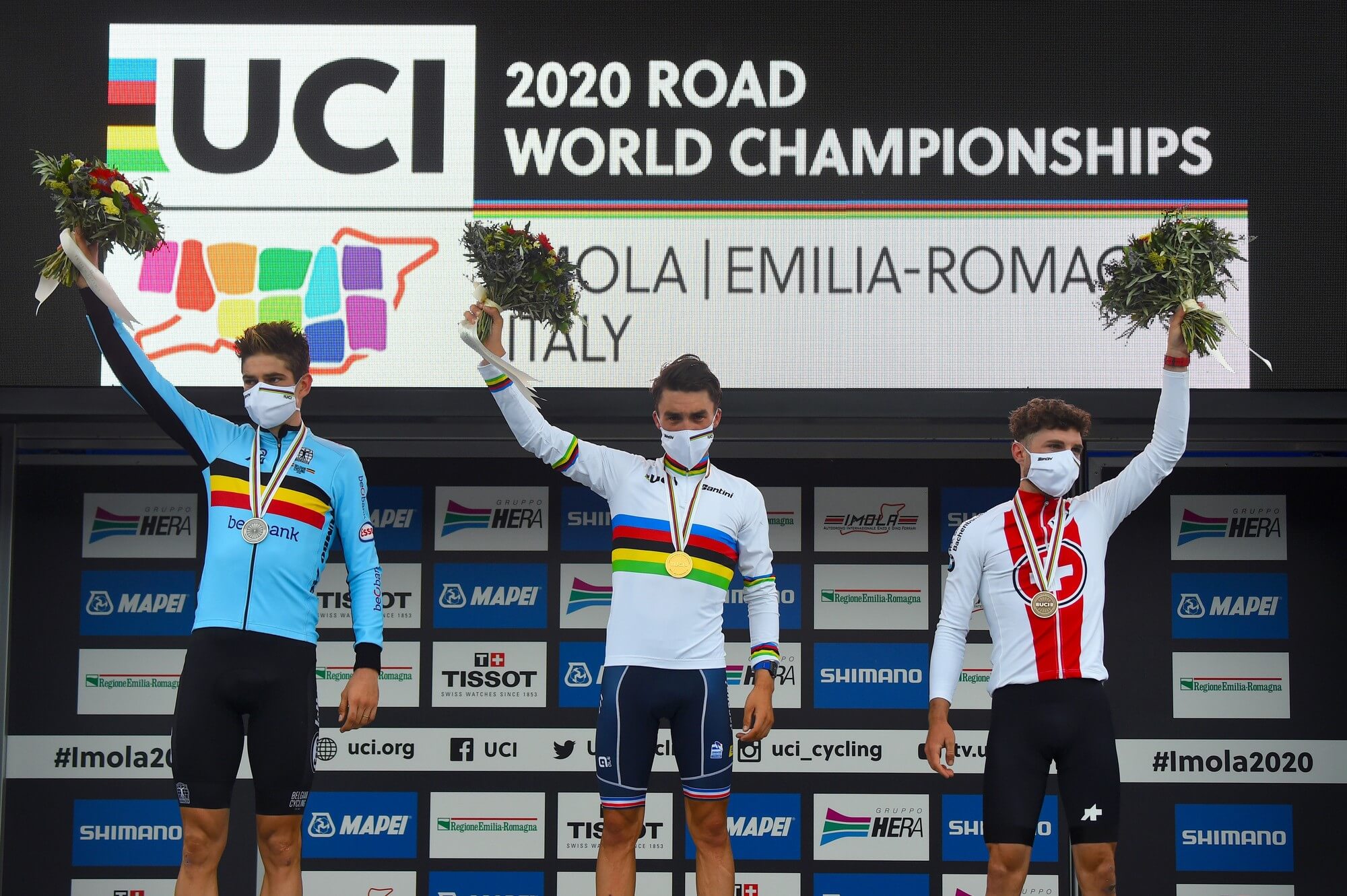 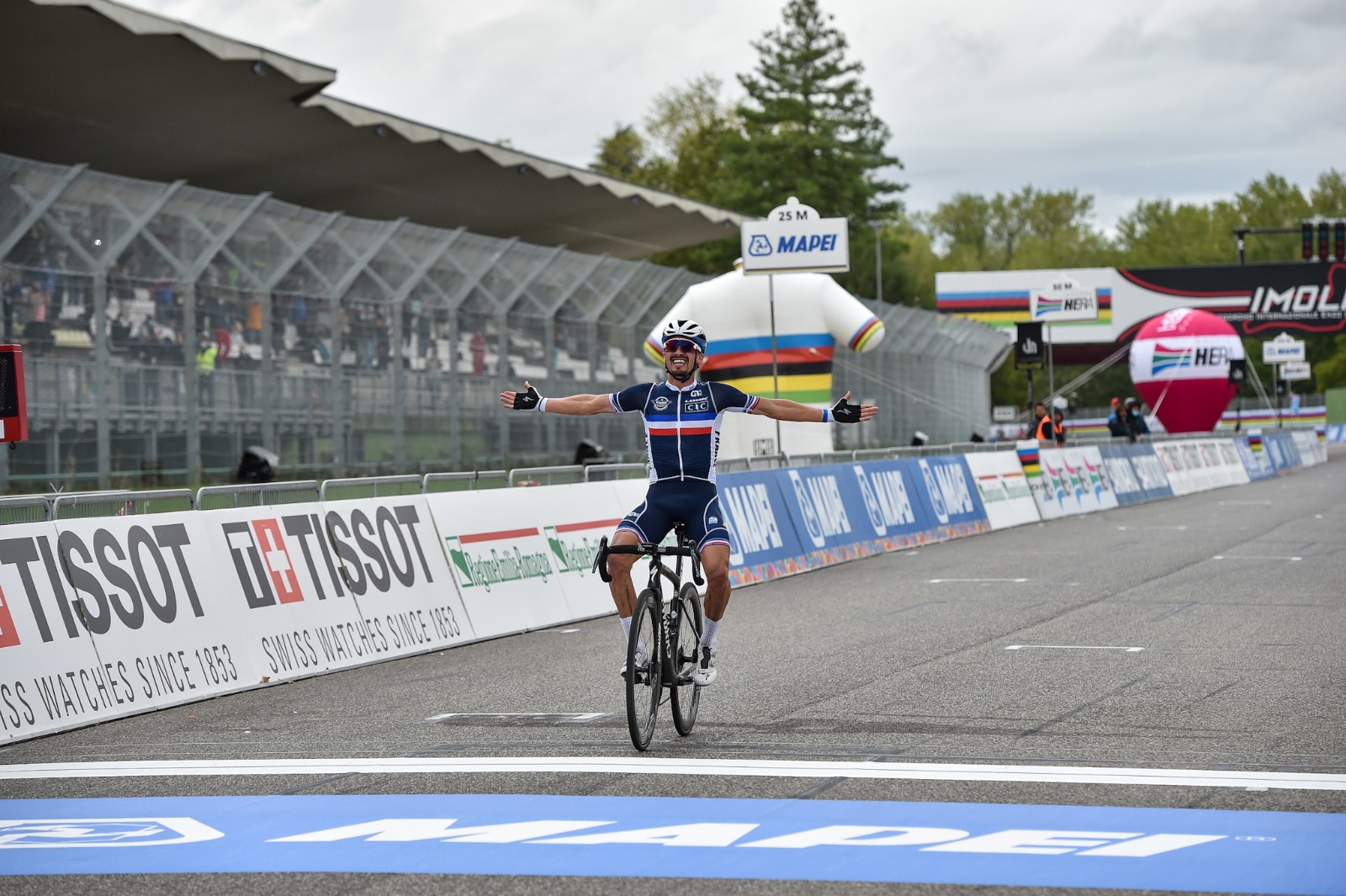 Italy, the Emilia-Romagna Region, Imola and its Enzo e Dino Ferrari Racetrack hosted a once in a lifetime edition of

Italy made a new Olympic record: the organisation of the World Championships in record time. This is a miracle and

The book of the most incredible cycling world championships in history is officially available! 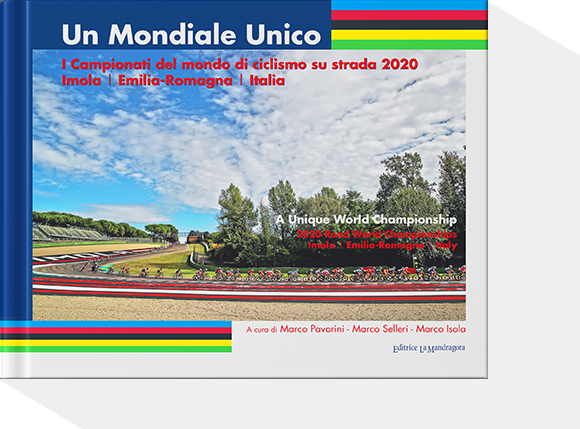